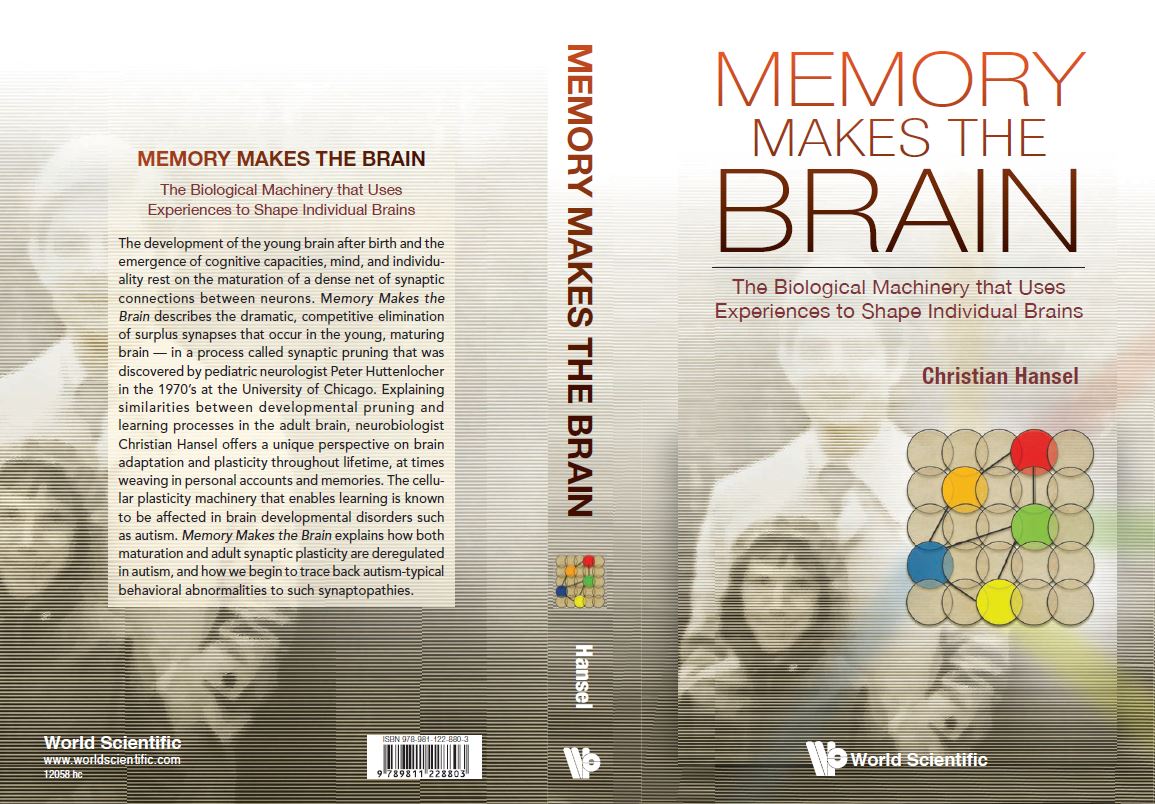 If all humans are made of molecules and cells, how do we so clearly become individuals, with such different ideas, thought processes, tastes, social characteristics?

While these are, in part, products of genetic variation, it’s pretty clear that our experiences have a profound effect—even, neuroscientist Christian Hansel, PhD, argues, on the very architecture of our brains. Somehow, what we take in from the world, he posits, is “engraphed” into the biological substance of our neuronal networks, leaving a permanent trace of our history.

Hansel is fascinated by how the interplay of genes and experiences affect brain development. In his forthcoming book, Memory Makes the Brain, he uses anecdotes from the history of neuroscience and the experiences of his own family to demonstrate two principles in brain science—plasticity and pruning—that work together to create the neural circuits that make each of us one-of-a-kind personality.

The plasticity of brain circuits, suggests Hansel, works somewhat like a memory foam mattress. A new experience alters a neural circuit to hold a memory. Repetition can impress an even more lasting imprint on the synapse network. Until, that is, a new experience pushes the “mattress” in a different way, at a different point. Thus new experiences can eventually reshape the circuit to leave another impression—a memory—on the brain.

But plasticity clearly does not operate in the same way across the brain’s entire lifespan. For instance, how do babies’ brains master so many important developmental steps—vision, motor control, language, trust or fear--so quickly and so well, and yet lay down few, if any, memories of specific, individual events in these formative years?

Hansel cites the careful studies of Peter Huttenlocher, MD, a pediatric neurologist at the University of Chicago in the 1970s and 1980s, that helps explain how babies’ brains develop. Deeply interested in how plasticity worked in normal humans, Huttenlocher collected cadaver brains from individuals ranging in age from a newborn up to a 90-year-old man, all apparently intellectually normal. He then selectively stained samples of each to see how synaptic connectivity differed among the samples.

Huttenlocher found the overall number of synapses in newborns and the elderly were about the same. It was what happened during the course of human lives that was surprising. For the first year or two after birth, the number of synapses grew substantially, with the total peaking at around age two. The number of synapses then gradually decreased until the early teen years, when they plateaued for a while, then started decreasing again in the 20s and 30s.

And that trajectory differed somewhat between individual areas of the brain. Synaptic density peaked in the auditory cortex at about three months and in the vision centers at about eight months, while the number of synapses in the prefrontal cortex, the seat of planning and complex cognitive behavior, crested at about age three. From then on, the number of synapses gradually decreased, in a process known as neural pruning. 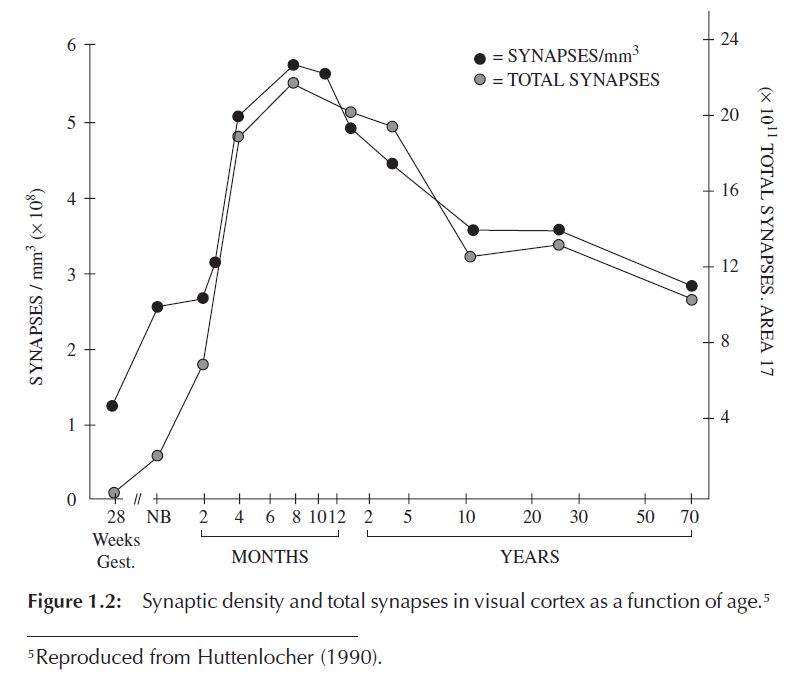 These findings provide lots of clues to how the brain—and our individual neural processing—develop. Clearly, our brains start by forming associations between as many neurons as possible. Why? Life has always been most dangerous for very young children, and who knows which of these connections will become vulnerable to injury or poor resources? Evolution has built redundancy into all our most important systems, and the brain certainly tops that list.

But brains require a lot of energy. In children under age 5, the brain accounts for as much as 60% of the child’s caloric needs. Once development is well under way, pruning less productive synapses allows our brains to accomplish much more with less.

Think of how humans develop networks in a new physical landscape. Groups moving into new environments start with lots of pathways to connect all the “nodes” of life—water, food, places for trade, secure hiding places—needed for a family or community to develop and grow. But after a while, social networks look for efficiencies. They clear and pave the most useful paths, eventually, perhaps, turning the most productive into superhighways. In this way, we get the greatest connectivity at the least cost.

The focus of most of Hansel’s work is autism, and his book applies the principles of plasticity and pruning to that particular brain circuit problem. Synapse “overgrowth” is one of the earliest signs of some autism spectrum disorders (ASD); certainly a lack of pruning helps to explain the greater excitability and poorly optimized connectivity in the neural circuits of people with autism.

But there are also some types of autism that seem to arise from poor synaptic connectivity in the brain. Hansel chalks this up, in part, to the extremely broad diagnostic criteria for ASD, which are actually many types of brain dysfunctions, from high-IQ Asperger’s patients to “syndromic” autism that involves major or complete language impairment. Lumping all these multiple disparate conditions under one moniker makes scientific study much more problematic.

While it is clear that there is a genetic component—twin studies have shown autism is fairly heritable—there is also clear evidence that exposure to some drugs or environmental chemicals during pregnancy have an influence, perhaps by regulating genes involved in the pruning process.

With at least 1000 genes potentially involved, unwinding these mechanisms is not simple. But figuring out the dysregulation in autism may provide insight not only to treating or preventing the disease, but also to understanding how each of our singular, distinctive brains develop. As Hansel’s book points out, “Memory traces create uniqueness in neural circuits and entire brains, and unlike individuality resulting from our inherited genome, this uniqueness is absolute.”

How the Brain Tells Apart Important and Unimportant Sensations